Mark Rothko and his paintings 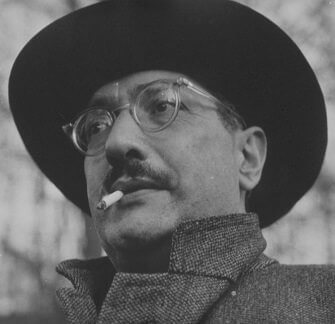 Mark Rothko (1903-1970) belongs to the generation of American artists who completely revolutionized the essence and design of abstract painting. His stylistic evolution, from a figurative visual repertoire to an abstract style rooted in the active relationship of the observer to the painting, embodied the radical vision of a renaissance in painting. Rothko characterized this relationship as "a consummated experience between picture and onlooker. Nothing should stand between my painting and the viewer." His color formations indeed draw the observer into a space filled with an inner light. Rothko always resisted attempts to interpret his paintings. He was mainly concerned with the viewer's experience, the merging of work and recipient beyond verbal comprehension. "No possible set of notes can explain our paintings," he once said. "Their explanation must come out of a consummated experience between picture and onlooker. The appreciation of art is a true marriage of minds. And in art as in marriage, lack of consummation is grounds for annulment."

Marcus Rothkowitz, also known as Mark Rothko, was born on September 26,1903, in Dvinsk, Russia, as the youngest of four children. His parents, Jacob Rothkovich (born in 1859) and Anna Goldin Rothkovich (born in 1870), married in 1896. Marcus's siblings were much older, his sister Sonia surpassing him by 14 years, his brothers Moise by eleven and Albert by eight years. Dvinsk is today part of Lithuania, and in 1990 was renamed Daugavpils (meaning "Fort on the Dauga"). The name recalls the birth of the town as a medieval fortress on the banks of the Dauga River, located in the Polish-Lithuanian kingdom until its annexation in 1722 by Russia under Czar Ivan IV.

During his childhood, he and his family moved to the United States and decided to remain there. He was only 10 years old when the Rothkowitz family left Dvinsk to settle in Portland, Oregon. Rothko attended school in Lincoln High School, located in Portland. As a student, he was quite brilliant and did well in the academics. In college, he pursued a degree in liberal arts, as well as the sciences, in Yale University. However, he failed to finish his course and decided to leave school in 1923.

Afterwards, he traveled to New York City to take up a course at the Art Students League with Max Weber, one of the only professors there to have firsthand knowledge of and enthusiasm for European modernism. Rothko's early expressionist paintings on everyday subjects reflected Weber's influence as well as that of artists such as Marc Chagall. By 1929, he found employment at the Brooklyn Jewish Center, where he served as a teacher.

Soon after, Rothko showed evidences of his exceptional skill as an artist. In fact, his works were often featured in New York's Contemporary Arts Gallery and Portland's Museum of Art. It was in 1933 when his fame as an artist blossomed as several people began to take notice of his original and intense artworks.

By the 1930s, there were a few other modern artists who decided to have their artworks exhibited. This included Rothko, and the group was labeled as "The Ten". Rothko focused on exhibiting his works for the Works Progress Administration, where his masterpieces became federally-sponsored.

Early in his life as an artist, Rothko's works featured various scenes and images of the bustling urban lifestyle. His paintings also exude some mystery, intense emotions and isolation. During the post-World War era, he began to feature images of survival and death because of the situations that prevailed at the time of war. There were also some paintings that included concepts that were rooted from various religions and ancient mythical themes.

The World War II had caused a number of leading European Surrealists to emigrate to New York, among them Max Ernst, Yves Tanguy, Robert Matta Echaurren, Andre Masson and Andre Breton. America's first year in the war, 1942, became the year of Surrealism in New York. The Museum of Modern Art showed Salvador Dali, Joan Miro, Paul Klee, and there was a series of one-man gallery shows with works by Masson, Ernst, Matta and Tanguy. The great pioneer of abstract art, Piet Mondrian, had moved to New York back in 1940. The critical discussion of his works and the arrival of the Surrealists were decisive steps in the rise of Abstract Expressionism. Rothko and another artist Adolph Gottlieb saw themselves as the new, independent successors to the European avantgarde. They sought to unite Surrealism and abstract painting.

Along with Adolph Gottlieb, Rothko imbibed a strong concept of what art is, according to how they viewed it. He and Gottlieb believed that art should be an adventure of exploring an unknown and mysterious world. The two artists also favored more the simplified and direct expression of an intricate thought.

Hence, in the 1940s, Rothko joined a group of artists who considered themselves as Abstract Expressionists. These artists included Gottlieb, Clyfford Still, Jackson Pollock, Helen Frankenthaler, Willem de Kooning, and Barnett Newman, among a few others. They referred to their works as abstract in nature. This means, their masterpieces offered intense emotions and expression without any reference to the earthly world.

In 1949, Rothko became fascinated by Matisse's Red Studio, acquired by the Museum of Modern Art that year. He later credited it as another key source of inspiration for his later abstract paintings.

I'm not an abstractionist... I'm not interested in the relationship of color to form or anything else...I'm interested only in expressing basic human emotions - tragedy, ecstasy, and so on. And the fact that a lot of people break down and cry when confronted with my pictures shows that I can communicate those basic human emotions... The people who weep before my pictures are having the same religious experience I had when I painted them. And if you are moved only by their color relationship, then you miss the point." - By Mark Rothko

The genre of Rothko's works continued in the 1950s. Furthermore, unlike other paintings that had descriptive titles, his works only had numbers instead of a brief title. Rothko also opted to create paintings that were large scale, and he worked on vertical canvases. Most of his works included rectangles, which were colored in various colors depending on the message they were trying to imply. These rectangles were also presented with a brightly colored background, which gives an image as though they were floating.

He adopted this style in all his works, and that gave him numerous ideas in terms of the combination of color and proportion. Thus, he used these rectangles and luminous colors to evoke varied moods and emotions to the ones looking at these paintings.

Rothko's style was referred to as Colorfield Painting. Instead of the usual drips and splashes of paint, his works featured simple use of color with broad sizes. He also painted in several layers of colors, which had an image as though they were glowing from the inside. It is also recommended for viewers to study his works at a very close range, so they could feel and emphasize with the emotions provoked by these paintings.

Later in Rothko's life, he leaned more towards darker and gloomier colors. It was in the 1960s when most of his paintings included a combination of colors such as black, brown and marroon. During this era, he was also earning more from commissions because of his large-scale works. For instance, he created some murals for New York's Four Seasons restaurant. However, this remained unfinished when he decided to quit working on this project.

Another large-scale painting he made was intended for a chapel based in Houston, Texas. As he consulted the architects of the chapel, he was able to create a solemn and peaceful space for contemplation with his use of immersive colors.

By 1968, Rothko suffered from intense depression due to his personal conflicts. This was also the primary cause of his untimely death when he committed suicide on February 25, 1970. Thus, he left Mary Alice Beistle, his second wife, along with his two children named Christopher and Kate. A legal conflict resulted from over 800 paintings that he left after his death. Soon, his remaining work was divided between various museums throughout the world, as well as the Rothko family members.

Mark Rothko's 45-year painting career can be divided into four period: the Realist years from 1924 to 1940, the Surrealist years 1940-1946, the Transitional years from 1946 to 1949, and the Classical years from 1949 to 1970. During the first two stages, Rothko painted the landscapes, interiors, city scenes, still-lifes and the New York subway paintings that were so influential on his later development. His work during World War II and the immediate post-war period is marked by symbolic paintings, based in Greek mythology and religious motifs. During his period of transition to pure abstract painting, he created the so-called multiforms, which would finally evolve into his famous works of the classical period with their rectangular, hazy fields of color.

Just like Vincent van Gogh on Impressionism, Mark Rothko's impact on American Abstract Expressionist movement is tremendous. Mark Rothko today has his place as one of the most important painters of post-World War II modernism. His radical refusal to copy nature reduced painting to large, vibrant fields of color. His works were a seminar influence on the development of monochrome painting. Remarkable is their spatial depth and meditative power, which engage the viewer in a dialog with the work. To Rothko, the trademark "mature" paintings, the ones that became synonymous with his name, went beyond pure abstraction. Rothko, for whom "tragic experience is the only source book for art," tried to make his paintings into experiences of tragedy and ecstasy, as the basic conditions of existence. The aim of his life's work was to express the essence of the universal human drama.